7 referral marketing campaigns that nailed it

Referrals are immensely effective. Before bringing up any facts or figures, just think about it: What triggers you to take an action: An intrusive video ad before a Youtube clip, or a message from your friend on Whatsapp? Do you prefer an obvious mass email campaign, or a call from your mother? Love the ads on the top of your Google search results, or a LinkedIn post from your college buddy? 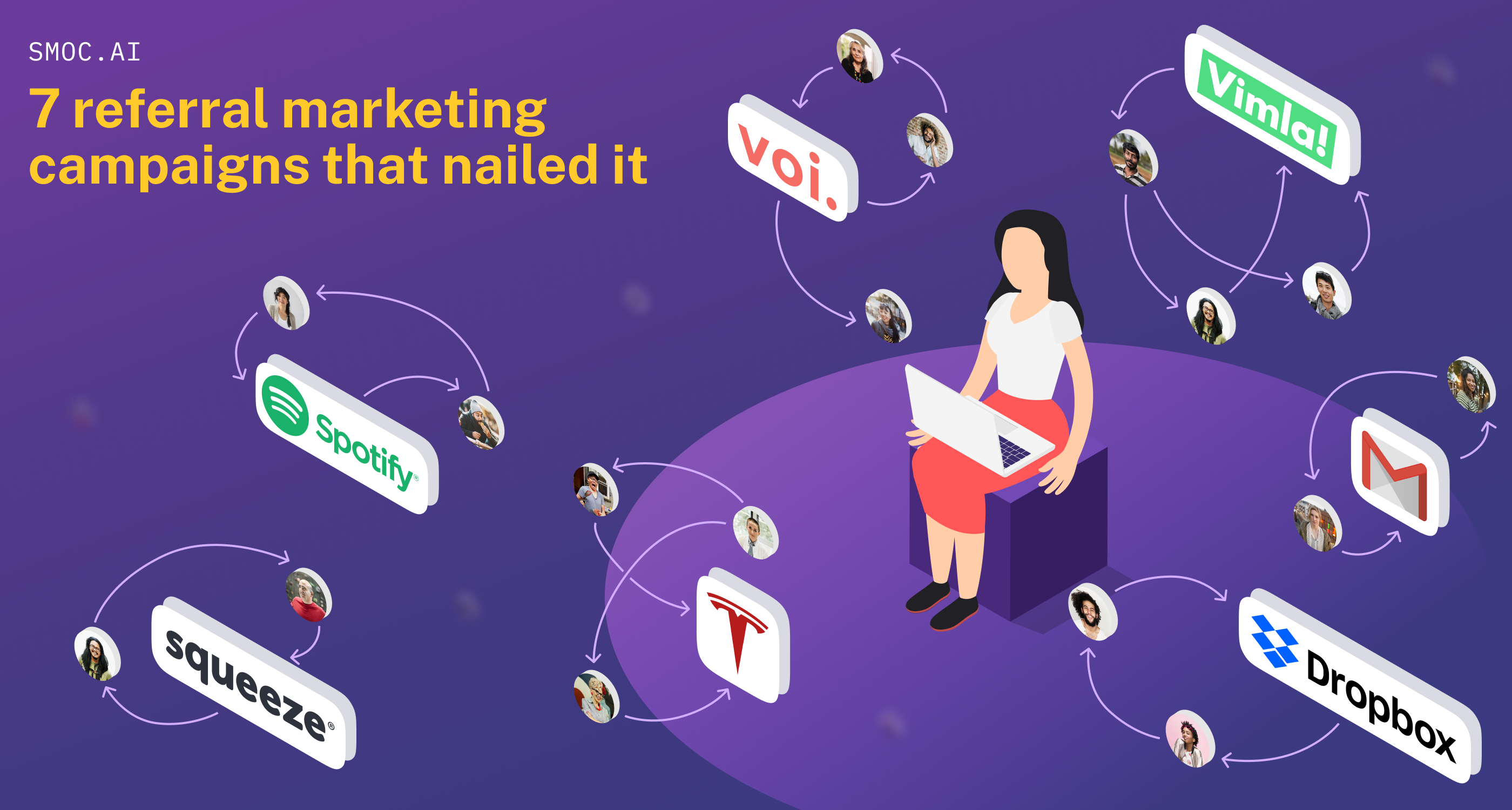 Hopefully my point has come across by now, if not here it is: All of us trust our friends, coworkers, family, and even completely random people more than we trust brands and ads. So let’s learn from some of the best, and see how you use this type of trust, in an engaging way, to grow your customer base and revenues.

Why you should care about referral marketing

- Referred leads convert 30% better and have a 16% higher lifetime value than leads acquired via other channels. [Invespcro]

- Customers acquired through word-of-mouth spend 2x more and make 2x as many referrals themselves. [Referral Candy]

- Referrals influence up to 50% of all purchasing decisions. [McKinsey]

As you see there’s enormous potential for your business to grow, by leveraging these types of strategies. So let’s look at seven examples. Some of these you might know, and some you may even have been a part of as a referrer or the referee.

When the Swedish music streaming service Spotify launched in 2008, it was at a small scale. It was limited to a couple of countries in Scandinavia, and the main way to get on to it was via an invitation. One of the ways to get a hold of these was by becoming a paying subscriber after you got invited. By doing so you got 5 Spotify invitations to share. The effect of this was that these early adopters of Spotify then had the power to bring eager and interested people along. And with all the pent-up curiosity around this new way of paying for and enjoying music, these early adopters had plenty of people to engage with. Later on they introduced a different referral program (pictured below), that rewarded referrers with a free month of Spotify Premium, when 5 friends signed up through their link.

Exclusivity and pent-up demand! By using these two proven tactics, combined with the power of referral marketing, the amount of Spotify users really took off. The fact that people were trading these invites back and forth, really says what type of value Spotify was able to bring to their desired market. 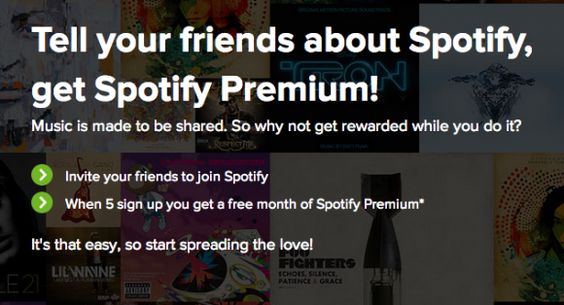 Tesla is still an underdog in the old school automotive business, but they used to be a way smaller one at that. And early on this underdog stated that they weren't going to spend anything on marketing. No chief marketing officer, no ad spend, no ad agency, you name it. So then how did they sturr up all the excitement for their Model S sedan before its launch? They ran a referral campaign that gave $1,000 credit to Tesla owners whose referrals resulted in the purchase of a Model S electric sedan. The friend making the purchase also got $1,000 off the price tag of their own model.

Instead of pouring money into traditional advertising, they literally gave it back to the customers joining them on their mission. The mission of disrupting the way people think of modern automotive transportation. Incentives like this referral campaign literally gave people something to talk about, to emphasize their own beliefs and spread those ideas they put their hard earned money towards. 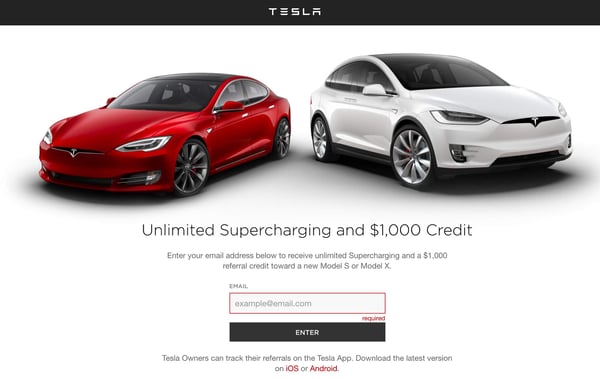 In the early days of cloud file storage, a lot of people were sceptical about the whole concept. Their old thumb drives were efficient, small and safe enough, so the majority of people didn’t see the need of moving their files again. So what did Dropbox do to entice people to join their service? They set up a referral campaign that gave users 500MB of extra free storage, per new Dropbox user they referred. The max amount of free storage you could get by doing this was 16GB, but that’s still quite a lot. Especially at the time Dropbox launched in 2008, when USB thumb drives with 16GB of storage had an average asking price of around 130 US dollars.

This is truly an example of how good ideas spread. And by bringing an element of gamification into the mix, with the status bar showing their users how much they had earned, this really catapulted Dropbox to new heights. In fact, the company grew by 3900% from 2008 to 2017. 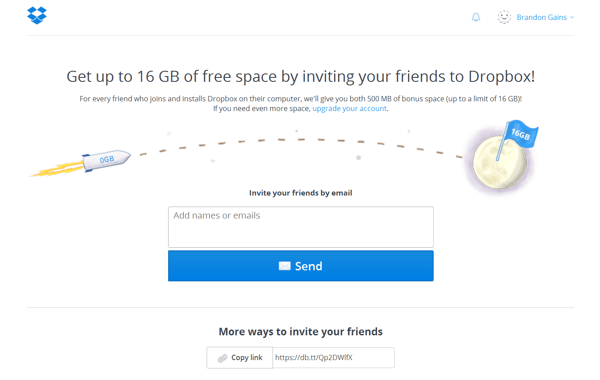 Make your customers your best online ambassadors, with the help of engaging referral programs. Join our webinar to learn how!

Voi is an electric scooter provider. To fuel their growth Voi built in a referral solution into their app. After you have signed up for a Voi account you are able to, as they say it; “invite your buddies” in exchange for Voi credits. Your buddies get an unique link that downloads the Voi app, and as soon as they sign up, they get their free credits. You, as the referrer don’t actually get your Voi credit until your buddy starts a Voi ride.

Like any great referral program, all parties are rewarded by completing the desired action. In this case, not just downloading the app and signing up, but actually starting a Voi ride. The initial referrer also has a reason to “nudge” their buddies along to start their first Voi rides, since they don’t get their Voi credits until this happens. This then naturally leads to conversations like “Have you tried out Voi yet?”. In other words; this tactic has word of mouth built right in. 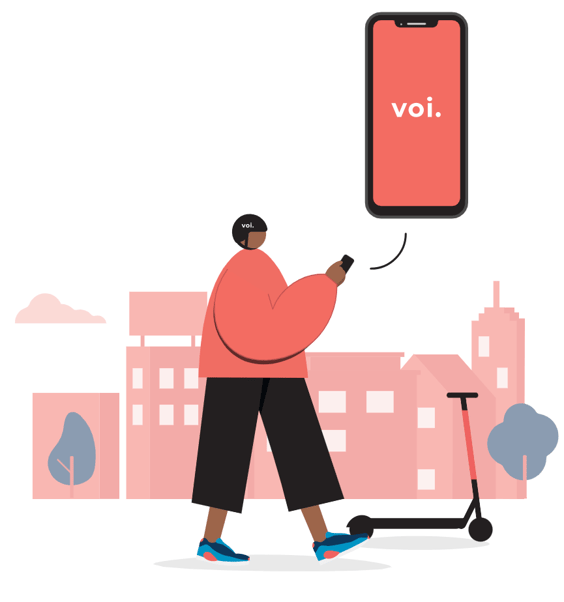 Quite similar to how Voi does it, the massage business Squeeze has built in a referral program in their business as well. In every new customer's profile, there is an easily shareable, unique promo code and referral link that redeems a free 25 minute massage for anyone who uses it. And if someone uses your code you get the same as them; a free 25 minute massage! But what they also encourage all their new members to do, is to share their unique referral code or link to social media. Here they also emphasize the extra value proposition of why their friends should do so: “Get 50 minutes of free massage - 25 minutes as a new Squeeze member + 25 minutes since they were referred by you”.

Psst! Click here to get my Squeeze referral link (you can thank me later ✌️)

The messaging Squeeze is fronting here is great, as well as the flexibility they bring to how customers would want to refer, either by code or a link. And like the other examples in this article, it rewards everyone involved and has a viral element built right into it. Just imagine what you would have to pay Facebook in the form of regular ads, for the same amount of Squeeze exposure as all of these organic posts from customers have brought. 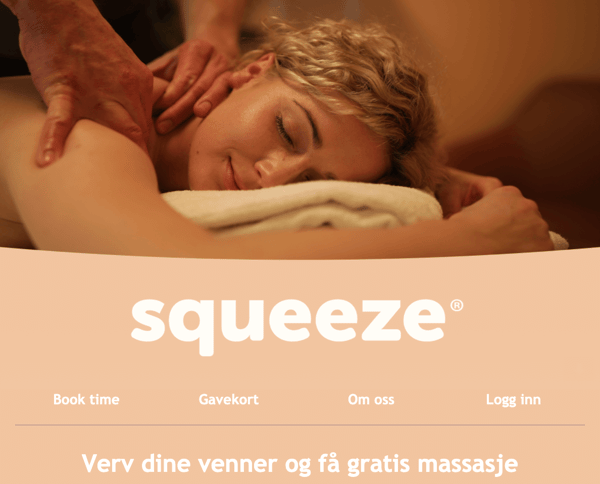 Here we have a Swedish telecom company that uses referrals not just to get people to sign up for their services, but to get both involved parties to stay on for longer. How do they do this? The way Vimla rewards both the one who refers and the ones referred, is by reducing the monthly bill for all of them by 10 Swedish kroner (about 1,1 US dollars). If you’re effective in bringing new business to Vimla, you can actually reduce your monthly bill to nothing: Zero. But this isn’t a one time thing, no this reduction in the monthly price applies for as long as everyone involved stays a customer. So it’s a gift that keeps on giving, as long as everyone stays loyal - not just to the brand, but also to each other.

Rewards that run over time are really effective for retention and increasing customer loyalty. When a great value like this keeps rolling, you will be so used to it that switching over to a competitor will be really difficult. Not to mention, what will your friends say when your switch leads them to get a higher phone bill every month?

Who doesn’t know about Google’s Gmail at this point? But this wasn’t the case when it launched in the spring of 2004. In the beginning, Google didn’t have the sufficient infrastructure in place to do a wide release. So similarly to what Spotify did some years later they did a strategic rollout based on referrals. Google launched Gmail in a beta that involved inviting a 1000 hand picked influencers to join the service. These then had the opportunity to invite a small number of friends, coworkers and family along, so that the user base grew steadily from there. As time passed and more and more people got invited in, Google also triggered new rounds of invites to the existing users. The pent-up demand of beeing able to join Gmail resulted in people selling their exclusive invites. According to PC World magazine, invitations were sold on sites like eBay for as much as 150 US dollars! Later on Gmail became available for everyone, but up until that point it really was considered extremely exclusive to have access to.

Once again we see exclusivity being a strong factor in conjunction with a strategic referral program. Brainstorm how you could do the same, either related to a service like this, or even something like a VIP customer event or exclusive member tier in your loyalty program.

Are you looking for an engaging referral solution for your business?

Now that you have seen quite a few examples of referral marketing at its best and why they worked, you might be wondering how you can actually get a campaign like this up and running. Luckily we at SMOC have just the solution you are looking for. With our referral tools you can easily make your best customers into ambassadors, and reward both them and everyone they bring along, just like the examples above show. The solution uses our interactive chatbots to engage and delight your existing and potential customers, with the help of gamification and our ever evolving AI engine. The conversation piece makes our referral totally unique. Like the rest of the SMOC.AI engagement platform, its main goal is to reward attention. Because in a more and more busy world, what is more valuable than just that; attention.

If you want to learn more about the solution you should check out our upcoming webinar on the subject, or book a totally free introductory session with one of our marketing experts. 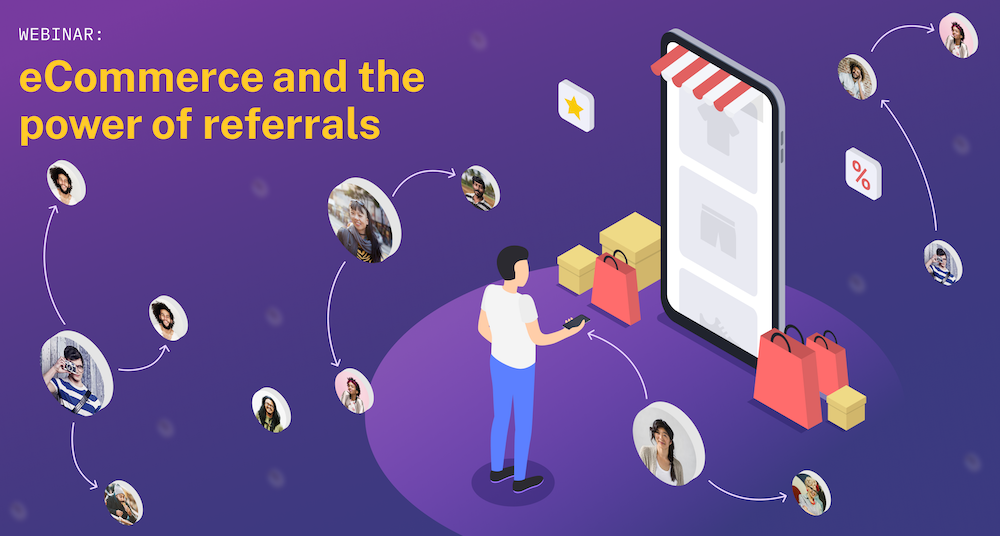